Welcome to WordPress.com. This is your first post. Edit or delete it and start blogging!

Modified atmosphere is a common technical definition that describes the practice of modifying the composition of the internal atmosphere of a package (commonly food packages, but this technique is also used for drugs) in order to improve the shelf life.

The modification process often tries to lower the amount of oxygen (O2), moving it from 20% to 0%, In order to slow down the growth of aerobic life forms and the speed of oxidation reactions. The removed oxygen can be replaced with nitrogen (N2), commonly acknowledged as an inert gas, or carbon dioxide (CO2), which can lower the PH or inhibit the growth of bacteria.

Controlled Atmosphere Storage (CAS) was used already in the 1930s when ships transporting fruits had high levels of CO2 in their holding rooms, thus increasing the shelf-life of the product. In the 1970s MA packages reached the stores when bacon and fish were sold in retail packs in the UK. Since then the development has been stable and the interest into MAP has grown due consumer demand. This has led to advances for example in the design and manufacturing of polymeric films. New techniques are designed, like the use of anti-fogging layer to improve product visibility. From MAP a new packaging technique? EMAP has been developed. The growing popularity of EMAP vegetables and fruits can be explained with the behaviors of the modern consumer who demands fresh vegetables and fruits which have a long shelf-life without the use of preservatives.

Under MAP products like red meat, seafood, minimally processed fruits and vegetables, pasta, cheese, bakery goods, poultry, cooked and cured meats, ready meals, and dried foods are packaged. The three major commodity types are fruits and vegetables, meat, meal products and seafood. It has been estimated that 25-40% of all fresh produce harvested will not reach the consumers table due to spoilage and mishandling that occurs during distribution.

Modified Atmosphere Packaging (MAP) is a technique used for prolonging the shelf-life period of fresh or minimally processed foods. In this preservation technique, the air surrounding the food in the package is changed to another composition. This way the initial fresh state of the product may be prolonged. It is the shelf-life of perishable products like meat, fish, fruits and vegetables that will be prolonged with MAP since it slows the natural deterioration of the product. MAP is used with various types of products, where the mixture of gases In the package depends on the type of product, packaging materials and storage temperature. Meat and fish need very low gas permeability films so for non-respiring products (meat, fish, cheese etc.) high barrier films are used. The initial flushed gas-mixture will be maintained inside the MA package. But fruits and vegetables are respiring products where the interaction of the packaging material with the product is important. If the permeability (for O2 and CO2) of the packaging film is adapted to the products respiration, an equilibrium modified atmosphere will establish in the package and the shelf-life of the product will increase.

There are two techniques used in the industry to pack vegetables namely gas-flushing and compensated vacuum. For its cheapness, the gas-flushing is more widely used. In gas-flushing the package is flushed with a desired gas mixture, as in compensated vacuum the air is removed totally and the desired gas mixture then inserted. The label "packaged in a protective atmosphere" can refer to either of these; an example of a gas mixture used for non-vegetable packaged food (such as crisps) is 99.9% nitrogen gas, which is inert at the temperatures and pressures the packaging is subjected to.

The atmosphere in an MA package consists of N2, CO2, and O2. It is the altered ratio of these gases that makes a difference in the prolongation of shelf life. By reducing the O2-level and increasing the CO2-level, ripening of fruits and vegetables can be delayed, respiration and ethylene production rates can be reduced, softening can be retarded and various compositional changes associated with ripening can be slowed down.

The inert properties of Nitrogen (N2) make it a good blanketing gas in many applications such as in Modified Atmosphere Packaging (MAP) to extend the shelf life of packaged foods by preventing oxidation, mold, insect infestation and moisture migration. Nitrogen(N2) is also used as a shield gas in the packing of some medicines to prevent degradation by oxidation or moisture adsorption.

When packaging meat and sea foods, the Carbon Dioxide (CO2) will reduce losses in retail meat counters caused by the natural discoloration of meat over time.  After the product “blooms”, pigments start to oxidize to the metmyoglobin state.  Once 70% of the myoglobin becomes oxidized, the meat surface becomes discolored or brown.  Meat starts to oxidize after it has been exposed to oxygen for 30 minutes.  So CO2 will suspend this process by displacing oxygen, and when properly implemented, will conservatively prevent discoloration for an additional day.

Oxygen is essential when packaging fresh fruits and vegetables as they continue to respire after harvesting. The absence of O2 can lead to anaerobic respiration in the package which accelerates senescence and spoilage. Too high levels of O2 do not retard respiration significantly and it is around 12% of O2 where the respiration rate starts to decrease. So oxygen is used in low levels (3-5%) for positive effect.

When selecting packing films for fruits and vegetables, the main characteristics to consider are gas permeability, water vapor transmission rate, mechanical properties, transparency, type of package, and sealing reliability. Traditionally used packaging films like LDPE (low density polyethylene), PVC (polyvinyl chloride), EVA (ethylene-vinyl acetate) and OPP (oriented polypropylene) are not permeable enough for highly respiring products like fresh-cut produces, mushrooms and broccoli. As fruits and vegetables are respiring products, there is a need to transmit gases from and to the package. Films designed with these properties are called permeable films. Other films, called barrier films such as K Type Film (PVDC Coated Film), are designed to prevent the exchange of gases and are mainly used with non-respiring products like meat and sea foods, dried foods, and ready meal.

Phillips, C.A.: (1996) Review: Modified Atmosphere Packaging and its effects on the microbial quality and safety of produce, International Journal of Food Science and Tech, 31, 463-479

We Bulid Macine For The Excellent Food Packing

Gas Flush  function: ON or OFF Option

Designed for medium-volume packaging for product, the VG-70 can accommodate trays of virtually any shape or size.  It can seal up to 8 cycles per minute, and up to 4 trays per cycle performing both vacuum gas flush and gas jet (Vacuumless) or just straight sealing without MAP.  The VG-70 can fufill M.A.P. packages with less then 0.1% oxygen residual.

Gas Flush  function: ON or OFF Option

Residual Oxygen Level: Achieved up to 0.1

· Inside cutting sealing (No film border after sealing)

Gas Flush  function: ON or OFF Option & Time Setting

The pneumatic type of ET-9V & 9A is volumetric piston filler, capable of completing production with short time. It is the best choice for high-volume filling, featuring a high precision (0.5% volume deviation), non-splash, non-drip nozzle system that is able to deliver up to 10 litres of product at a time from a 30 gallon product hopper. Mascara, Ink, engine oil, and so on…

Syrup, Honey, and so on…

· Suitable for Any Flowing Liquid Without Solid

Here at MERTELL PRECISION, we take advantage of “Comprehensible Technology” & “Know How” for packaging sealing machine. We offer customer a business with Original Design Manufactures (ODM) or Original Equipment Manufacturer (OEM) for variable demands on packing solution. From table top type sealer and rotary to linear sealing machine. For simply tray sealing function or modified atmosphere packaging (MAP), all you can find at MERTELL PRECISION. We formulate and customize high quality machine with reasonable offer, and strengthen customer’s competitiveness to expand market and assist customer in gaining more profit. We can let customer’s dream come true on Original Brand Manufacture (OBM) with the least investment.

Just forward us your enquiry; we have a pleasure in serving you at all time.

With a mechanical index gear drive system for conveyor, ET-22 can be assembled both additional equipments and perform high capacity on production.  Furthermore, ET-22 can have an option feature for Vacuum & Gas Flush function or Gas Jet (Vacuumless)design to operate modified-atmosphere-packaging (MAP) that efficiently prolong product’s shelf-life and keep food in fresh. Standard Machine Specification (other specifications can be defined and customized by customer requirement.)

With an index gear motion design, the rotary tray sealer of ET-80/85 is the most popular machine for the multi-function application, and allows assembling additional equipments according to customer’s demand such as container dispenser/denester, filler, pre-cut lid applicator, cover overcapping, and discharger. Moreover, ET-80/85 can have an option feature for vacuum & gas flush (Modified Atmosphere Packaging) or Gas Jet (Vacuumless) design. 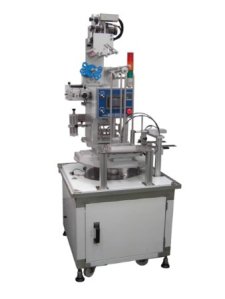 Standard Machine Specification (other specifications can be defined and customized by customer requirement.)

Gas Flush  function: ON or OFF Option & Time Setting